I joined Northgate Swimming Club in 1976 and had two children who swam for the club. I now have 2 grandchildren who also swim for Northgate. I was appointed chief coach in 1982, a post I held for 35 years, gaining my A.S.A. coaches certificate in 1994.
A former A.S.A. tutor, I was awarded the British Empire Medal in 2018 for services to swimming and also the Midland District Life Time Achievement award in 2010.

‘ D ’ is supported by a number of volunteers including Richard Homer who is actively engaged in developing Northgates presence at galas and the forthcoming Arena league meets. 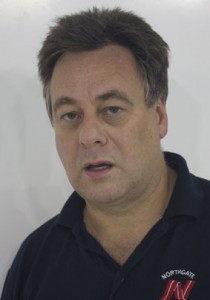 Keith has extensive experience with Northgate with over 25 years commitment to the club setting the foundations with our younger swimmers as they develop to progress to the performance squads. Keith is Level 2 qualified and supported by Theresa Cole, Kerry Pace & Ian Marshall.

Theresa Cole is a qualified level 2 Coach, a Level 2 Judge and all three of her children currently train within the club starting off at very young ages.

Kerry has been involved with Northgate for a number of years and recently qualified as an official gala ‘ Starter ’ and is also a qualified swimming teacher.

Ian is a former Northgate Club swimmer, an active member of the ‘ Masters ’ group and a qualified swimming coach.

Mike has been both a competitive swimmer and now coach with Northgate Swimming Club and is actively involved with the development of galas and annual competitions.